Since it was discovered in 1985, the Antarctic ozone hole has been a potent symbol of humankind’s ability to cause unintended environmental harm. But now comes a glimmer of good news: The void in the ozone layer is shrinking. “It’s a big surprise,” says Susan Solomon, an atmospheric chemist at the Massachusetts Institute of Technology in Cambridge. “I didn’t think it would be this early.”

Although the hole will not close completely until mid century at the earliest, the healing is reassuring to scientists who pushed for the Montreal Protocol. The 1987 international agreement phased out the industrial production of chlorofluorocarbons (CFCs): chlorine-containing chemicals that help trigger the destruction of stratospheric ozone, which screens out cancer-causing ultraviolet light. The Montreal Protocol was accepted almost universally and successfully gained global cooperation to reduce the production and release of Ozone Depleting Substances (ODS). When Chlorofluorocarbons (CFCs) are released the free chlorine molecules that become available in the atmosphere are able to deplete the O₃ ozone molecule in a catalytic reaction allowing Ultraviolet (UV-B) radiation to enter the atmosphere. Layers of depleted ozone open up over both poles just as winter gives way to spring. During the wintertime cold, nitric acid and water condense out of the atmosphere and form wispy clouds. The surfaces of the cloud particles host chemical reactions that release chlorine that came from CFCs. The chlorine, in turn, goes on to destroy ozone—but only in the presence of light. That is why, over Antarctica, ozone loss doesn’t get going in earnest until September, the beginning of the southern spring, when light returns to the pole. Peak losses are usually in October, and that is when researchers have typically taken stock of year-to-year changes in the hole.

To determine whether declining pollutants deserve credit for the recovery, the researchers used a 3D atmospheric model to separate the effects of the chemicals from those of weather, which can affect ozone loss through winds and temperature, and volcanic eruptions, which deplete ozone by pumping sulfate particles into the upper atmosphere. The sulfate can play the same role as cloud particles, activating chlorine. 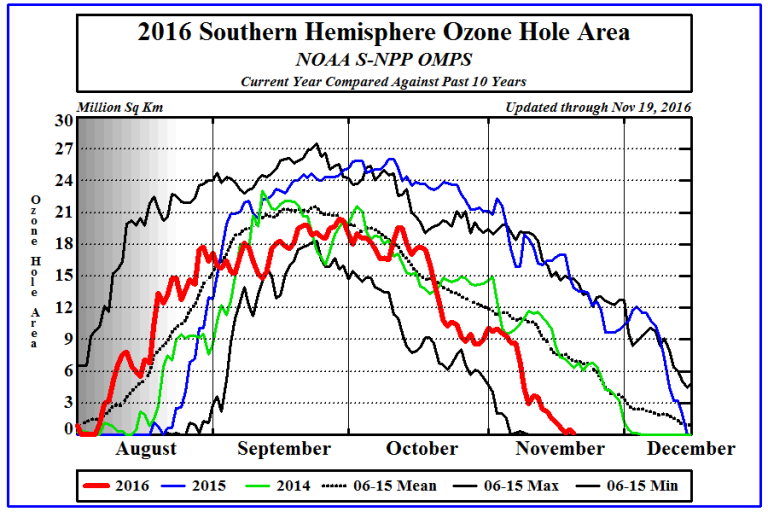