“The best way to find yourself is to lose yourself in the service of others”…….Mahatma Gandhi.

You don’t need a reason to help people, Do you? But it’s about life and it’s sweet and bitter experiences which drive people to behave in an exceptional manner. Why some human beings make an impact on this world, they set an example, they inspire others and some remain ordinary. The words “risky” and “brave” are the answers.

One must be able to take risks in life, one must be brave enough to help the mankind. The stories we have learnt in our childhood are of great men like Yuri Gagarin, Neil Armstrong, Edwin Aldrin, Michael Collins who took the space missions possible- for them we could initiate space exploration. Think about Vasco-da-Gama or Christopher Columbus- had they not existed, we would not have learnt about many nations discovered and explored for trades, colonization etc. There must be brave men and women who can take the risk and help the world and its living beings.

India, the versatile nation is celebrating a great festival, Deepavali- the festival of lights, colours, flowers, snacks n sweets and of course firecrackers. This is the festival when people really realise ‘JOY’ of life but at the same time, it can cause the deepest sorrow. As the day began, I started preparation of making snacks and arranging earthen lamps, my WhatsApp beeped for a sad news. the city where I was born met an accident where a firecracker shop is completely burnt away in the wee hours of the night, killing one and 18 bikes parked near the shop just doused in fire. I watched the video as people captured it on their mobile phones and waited for the fire brigade to come to the rescue. Sounds peculiar, right? You won’t get many people who take risks. 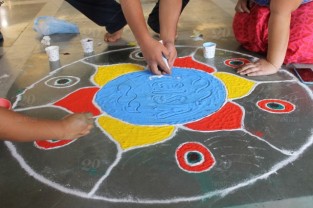 Now, my hero enters in my today’s write up! Mr Bipin Ganatra, a humble man who featured in BBC series- Unsung Indians. He is also awarded our country’s one of the highest award- Padmashri. Coincidentally, I watched him today, the first time in television, in an interview talking about his life and dreams. Bipin, a resident of the city of Kolkata, lost his brother at the age of 12 when his only brother succumbs to burn injuries. The poor boy was working to repair a bike when a spark reached the fuel tank and the bike caught fire. The mechanic suffered burn injuries and died.

This incident of life changed Bipin. He vowed himself to fight against fire. Wherever there is a fire accident, Bipin reaches to help the people, to help the fire brigade team members. He watches TV whole day, in between his work, to know about the fire hazards. As soon as a fire breaks out, he hires a taxi or other means of transport to reach the spot. He never had a training of firefighting, nor he was interested to join fire brigade team, but what he does is completely voluntarily. even the fire brigade officials too, depend on him, takes his advice, but he never charges a single penny for his service to them. He says, his touchy moment was when he rescued a pregnant woman from the fifth floor of a building which was under severe firey flames. The woman once rescued, cried inconsolably and said Bipin that she will keep her son’s name after him. What can be the biggest gift for a life which serves only others? Bipin never searched a secure job, he does all odd jobs so that he can keep himself free for his volunteer work! Very recently he could escape death while fighting a fire. Kolkata is very densely populated city where more than 1600 fires broke out in the year 2015. Bipin was in three places in a day to fight fire- his record so far!

What a braveheart! How a man can be rewarded who takes risk almost every day for others?

3 thoughts on “A selfless Fire-fighter”